skip to main | skip to sidebar

The Village Voice published its list of the Best of NYC in their October 21, 2009 issue. Here is what they say on page 26.

Best
Argument Against Eminent Domain
As part of the city's revitalization plans for Brooklyn, an eminent domain notice (seizing property for economic development) was served at a downtown building in January 2004- but the city picked the wrong people to mess with. Owner Joy Chatel fought to preserve 227 Duffield Street. Getting help from (among others) activist Raul Rothblatt, she beat back the threat in 2007. They weren't just fighting for a piece of property, but also a piece of history- the building was home to well known abolitionists and noted by historians as being part of the Underground Railroad. The Duffield collective is raising money to turn the building into a museum, which could become quite an attraction. The fight with the city hasn't ended though: Surrounding buildings, which also have abolitionist history, have been bought up by the city for hotel construction or are under threat of eminent domain. Though they'd like to work with the city, Rothblatt insists that the Duffield group will "fight to the end, promoting and protecting the property."

The Voice ends up by giving a link to this blog- Thanks!
Posted by raulistic at 9:38 AM 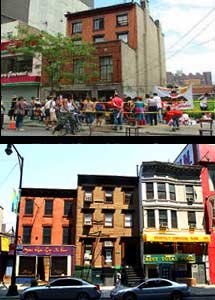